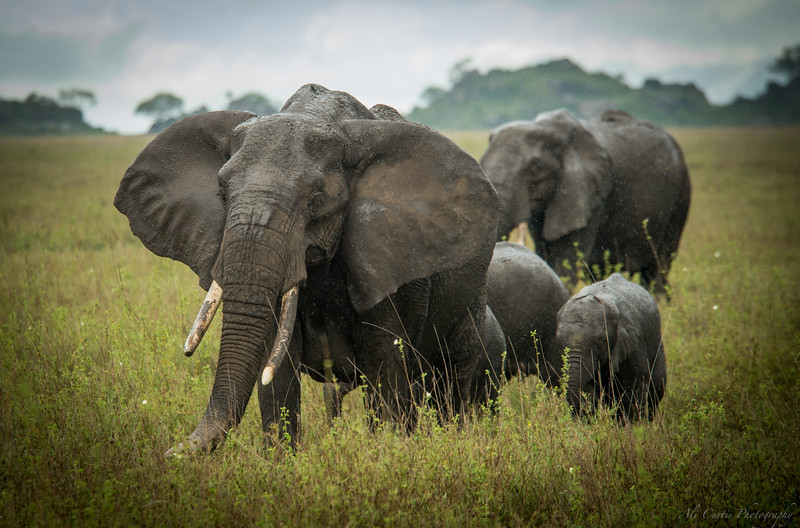 We were lulled out of a deep sleep by a slow, low rumble. The sound was almost soothing as we lay under the safety of the wispy mosquito netting. As the rumble drifted off into the night, it was replaced by the movement of bushes and grass and falling dirt. The disturbance was coming from just in front of the rustic, African chalet that we lovingly called home for a few brief days. The front of the quaint, adobe cottage was a beautiful veranda, an extension of the bedroom. The two were separated by rich, wooden-framed doors with floor-to-ceiling screens, flanked by windows of the same. No glass to hold back the night, just safari canvas if you chose to lower it, which we didn't. The cottage sat nestled into the lush hillside overlooking the expansive vista of the Chobe river. One could see for miles into Namibia, where the grasslands were dotted with cattle grazing the flatlands instead of the zebras, wildebeests, and water buffalo that were grazing on the Botswanan side.
And then, the rumble came again, deep and low and slow, almost vibrating the wooden window frames. I peered through the wall of screens and could make out the smooth, dark back of a huge female, perhaps the matriarch, illuminated by the full moon, and standing distinctly taller than any of the bushes around her. She was working her way through the grasses and bushes surrounding the cottage. The smallest of movements by her enormous body resulting in noise that filled the space, sounding like a dozen people shaking the bushes and pulling up grasses.
From the right appeared another, perhaps half the height of the first, and so close to the cottage, I was sure she would scatter leaves and dirt on the concrete veranda. I could hear her grab a large tuft of long grass with her sensitive, yet powerful trunk, and rip it effortlessly from the earth, shaking it clean of the dry dirt and then happily munching it down with huge grinding molars. A satisfied sigh emanated from her trunk, sounding a bit like a horse when it breathes out and shutters its lips.
There were others as well, the same sounds wafting throughout the windows to the right and the left and from behind. The group had herded through the camp and surrounded our little abode; dwarfing it with their number and size. Contented rumbles came from deep within their chests and satisfied sighs emanated from their trunks. As they moved off, their massive bodies pushed the trees and brush aside, their big, soft feet flattening the bush and rearranging the earth. We drifted back to sleep, having been enveloped wholly by the African night.